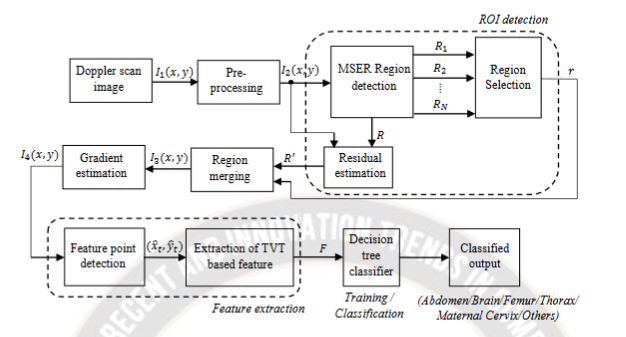 The classification of ultrasound scan images is important in monitoring the development of prenatal and maternal structures. This paper proposes a big data classification system for ultrasound Doppler scan images that combines the residual of maximally stable extreme regions and speeded up robust features (SURF) with a decision tree classifier. The algorithm first preprocesses the ultrasound scan images before detecting the maximally stable extremal regions (MSER). A few essential regions are chosen from the MSER regions, along with the residual region that provides the best Region of Interest (ROI). SURF features points that best represent the region are detected using the gradient of the estimated cumulative region of interest. To extract the feature from the pixels that surround the SURF feature points, the Triangular Vertex Transform (TVT) transform is used. A decision tree classifier is used to train the extracted TVT features. The proposed ultrasound scan image classification system is validated using performance parameters such as accuracy, specificity, precision, sensitivity, and F1 score. For validation, a large dataset of 12,400 scan images collected from 1792 patients is used. The proposed method has an F1score of 94.12%, sensitivity, specificity, precision, and accuracy of 93.57%, 93.57%, and 97.96%, respectively. The evaluation results show that the proposed algorithm for classifying Doppler scan images is better than other algorithms that have been used in the past.