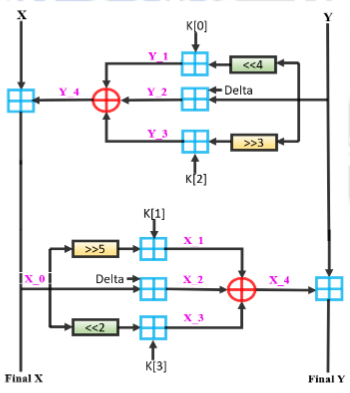 Millions of devices are predicted to be connected via the Internet of Things (IoT), which is a promising technology for the future. In numerous industries, interest in leveraging the Internet of Things is predicted to expand. Various IoT applications in the healthcare industry are being studied, and the potential for IoT to improve healthcare will be huge. The rise in communications is likely to result in mountains of data, posing a danger to data security. The architecture's gadgets are substantially smaller and less powerful. Due to their complexity, traditional encryption algorithms are computationally demanding, requiring a significant number of rounds for encryption, and draining the limited power of devices. A less sophisticated method, on the other hand, may jeopardise the desired result. Many encryption techniques have recently been suggested to guarantee the security of data transmission across the Internet of Things. Because it requires less memory and is simple to implement in both hardware and software, of all the algorithms, the Tiny Encryption Algorithm (TEA) seems to be the most appealing. TEA has a number of flaws, particularly when it comes to equivalent keys and matching key assaults. As a result, in this study, we present "AL-TEA: An Alternative TEA Technique for Healthcare Images in the IoT," a lightweight encryption algorithm.